Your application just broke, oh no! It couldn’t have been your code, right?

I’ve always had trouble spotting mistakes in my own work such as spelling, grammar, mathematical, or even in programming. With spelling or grammar, office applications quickly pick up on my mistakes and underline them for me, but most of my mistakes come from my own hubris. I’m confident in what I do, and that gets me in trouble when I make little mistakes. I’m confident that I solved this problem correctly and didn’t make any small mistakes. As a kid competing in timed math competitions, I quickly learned that reviewing your work cost time, so it was important to recognize where common mistakes would crop up on certain problems and spend slightly extra time the first time through those problem areas, rather than double checking the work in its entirety, unless I had the time to spare. Measure twice, cut once.

The same is true for programming. Writing test cases is time consuming, and if time is money, then it could be said that writing tests is costly. There’s probably a logical fallacy in there. In general, we hope that the time-cost of writing test cases will be recuperated by the time-cost of bugs caught, though it’s not easy to measure the time-cost of averted bugs. I’m all for test cases. I think that SQLite having 100% branch coverage is incredible, truly an lofty achievement. People get bogged down in arguments over type systems where testing is more of a must for languages without a compiler to catch certain bugs.

Ok, so going back to your code, something is wrong. But we’re confident it couldn’t be our code. Maybe it’s one of those open source modules I’m using not being tested enough, or that pesky browser implementation, or this damned OS. It couldn’t be my code.

I see bug reports all the time where people say your X breaks my Y, but when asked to provide Y they can’t for whatever software licensing reason. The bug resolver (person who is enabled to fix said bug in X), doesn’t know at this point whether the bug reporter (developer of Y) did their homework; the bug is unconfirmed. Both reporter and resolver are suspicious of each others’ code. I don’t make silly mistakes, right? 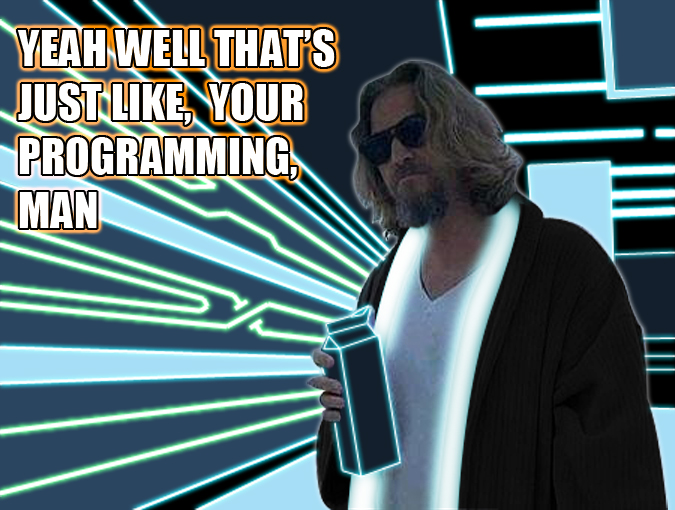 So it’s up to the resolver to work out a test case. Being able to reproduce said issue is the first goal to resolving a bug. Just like scientific statements aren’t taken as fact until reproducible, so too will this bug be merely conjecture at this point. It kills me when the bug resolver closes an issue because it works for me. Nothing boils my blood more; I took the time to try and help you and wasn’t rewarded on some level so I feel that I wasted my time. But from where you stand the resolver is not correct, so again I say…

I think that it’s super hard to get meaningful feedback from users. It’s hard for them to express why they’re frustrated. We as software developers don’t always point them in the right direction. As users can have wide ranges of technical capabilities, sometimes we as more technical oriented people have to do a little hand holding. For instance, from Firefox, how many hops does it take to get from the application’s menus to their open bug tracker, bugzilla? Where can I report an issue? How do I report an issue? Do I annoy the hell out of the user until they rate my app? Users might be complaining on Twitter, but that’s sure as hell not where devlopers are looking for bug reports. Enabling the user to provide feedback could be viewed as a double edged sword. Can I make meaningful conclusions from the torrent of feedback I’m now getting? Did I structure my form in such a way to ask the right questions? Should we make our issue tracker public? Should we make security issues that could harm users, if more widely understood, public? Public to fellow employees, even? What did you expect to happen, and is that what actually happened? This rabbit hole goes deep.

The other day, I was writing a patch for a large application that was developed by someone else and that I still don’t fully comprehend in its entirety. My patch should have worked, why wasn’t it working? Probably something in this person’s code right? Sure enough, I wrote a simple test case to eliminate everything but the control variables, and it turns out I was wrong.

It’s hard to get users to do more than the bare minimum to report an issue, even at all, but to prevent the issue from being ignored or closed because it works for the developer in their environment, take the time to report it correctly the first time. As someone who understands technology more than the average person, take the time to write a cut down test case that exposes the issue. The developer who looks at the issue will be grateful; instead of wasting their time with something that may not even be a bug, you’ve just done something that would have to be done anyways if it is indeed a bug. You might find that a reduced code size shows that it’s in fact not an issue with someone else’s code, but in fact a simple mistake you made somewhere in your monolithic application. Or it might be exactly the evidence you need to get someone’s attention to fix said problem. That test case might even be included in the latest test suite. Either way, you have now proved beyond a reasonable doubt that the issue does not lie in your fault.

Write a Test Case for Your Next Bug Report or Issue.