I was recently lucky enough to get to attend my first SIGGRAPH conference this year. While I didn’t attend any talks, I did spend some time in the expo. Here is a collection of some of the neat things I saw at SIGGRAPH 2015. Sorry it’s not more collected; I didn’t have the intention of writing a blog post until after folks kept asking me “how was it?”

Most booths had demos on VR headsets. Many were DK2’s and GearVR’s. AMD and NVIDIA had Crescent Bay’s (next gen VR headset). It was noticeably lighter than the DK2, and I thought it rendered better quality. It had nicer cable bundling, and headphones built in, that could fold up and lock out of the way that made it nice to put on/take off. I also tried a Sony Morpheus. They had a very engaging demo that was a tie in to the upcoming movie about tight rope walking, “The Walk”. They had a thin PVC pipe taped to the floor that you had to balance on, and a fan, and you were tight rope walking between the Twin Towers. Looking down and trying to balance was terrifying. There were some demos with a strange mobile VR setup where folks had a backpack on that had an open laptop hanging off the back and could walk around. Toyota and Ford had demos where you could inspect their vehicles in virtual space. I did not see a single HTC/Valve Vive at SIGGRAPH. 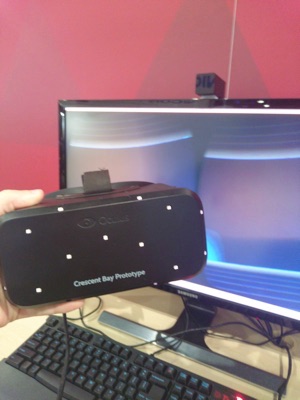 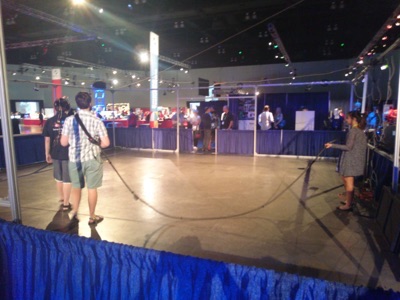 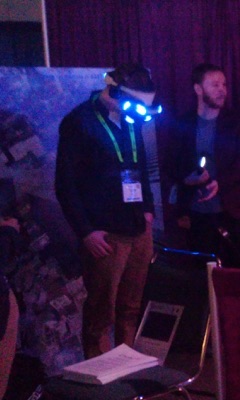 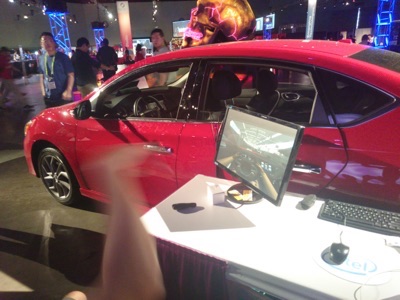 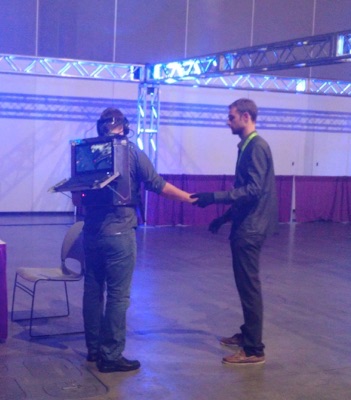 Epson had some AR glasses. They were very glasses friendly, unlike most VR headsets. The nose piece was flexible, and if you flattened it out, the headset could rest on top of your glasses and worked well. The headset had some very thick compound lenses. There was a front facing camera and they had a simple demo using image recognition of simple logos (like QR codes) that helped provide position data. There were other demos with orientation tracking that worked well. They didn’t have positional sensor info, but had some hack that tried to estimate positional velocity off the angular momentum (I spoke with the programmer who implemented it). https://moverio.epson.biz/

There was a demo of holograms using tilted pieces of plastic arranged in a box. Also, there was a multiple (200+) projector array that projected a scene onto a special screen. When walking around the screen, the viewing angle always seemed correct. It was very convincing, except for the jarring restart of the animated loop which could be smoothed out (think looping/seamless gifs). 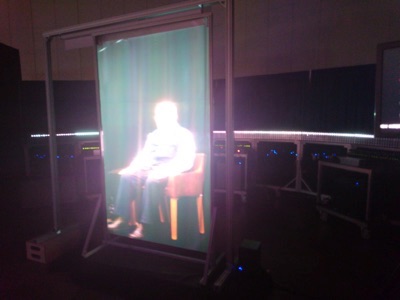 Google cardboard had a booth showing off 3D videos from youtube. I had a hard time telling if the video were stereoscopic or monoptic since the demo videos only had things in the distance so it was hard to tell if parallax was implemented correctly. A bunch of booths were showing off 3D video, but as far as I could tell, all of the correctly rendered stereoscopic shots were computer rendered. I could not find a single instance with footage shot from a stereoscopic rig, though I tried.

NVIDIA and Intel had the largest booths, followed by Pixar’s Renderman. Felt like a GDC event, smaller, but definitely larger than GDC next. More focus on shiny photorealism demos, artistic tools, less on game engines themselves.

Intel had demos of Vulcan and OpenGL ES 3.2. For 3.2 they were showing off tessellation shaders, I think. For the Vulcan demo, they had a cool demo showing how with a particle demo scene rendered with OpenGL 4, a single CPU was pegged, it was using a lot of power, and had pretty abysmal framerate. When rendering the same scene with Vulcan, they were able to more evenly distribute the workload across CPUs, achieve higher framerate, while using less power. The API to Vulcan is still not published, so no source code is available. It was explained to me that Vulcan is still not thread safe; instead you get the freedom to implement synchronization rather than the driver.

There was a neat demo of a planetarium projector being repurposed to display an “on rails” demo of a virtual scene. You didn’t get parallax since it was being projected on a hemisphere, but it was neat in that like IMAX your entire FOV was encompassed, but you could move your head, not see any pixels, and didn’t experience any motion sickness or disorientation. 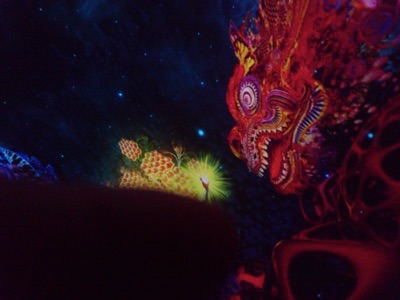 I spoke with some folks at the X3D booth about X3DOM. To me, it seems like a bunch of previous attempts have kind of added on too much complexity in an effort to support every use case under the sun, rather than just accept limitations, so much so that getting started writing hello world became difficult. Some of the folks I spoke to at the booth echoed this sentiment, but also noted the lack of authoring tools as things that hurt adoption. I have some neat things I’m working on in this space, based on this and other prior works, that I plan on showing off at the upcoming BrazilJS.

There was a cool maker faire, some things I’ll have to order for family members (young hackers in training) were Canny bots, eBee and Piper. 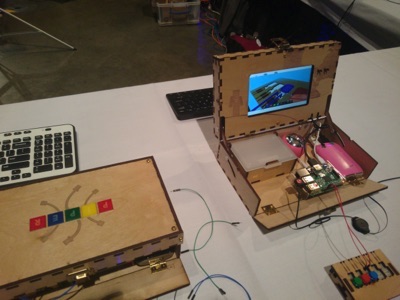 Bunch of neat input devices, one I liked used directional sound as tactile feedback. One demo was rearranging icons on a home screen. Rather than touch the screen, there was a field of tiny speakers that would blast your finger with sound when it entered to simulate the feeling of vibration. It would vibrate to let you know you had “grabbed” and icon, and then drag it.

This was the first time I got to see my book printed in physical form! It looked gorgeous, hardcover printed in color. I met about half of the fellow authors who were also at SIGGRAPH, and our editor. I even got to meet Eric Haines, who reviewed my chapter before publication! 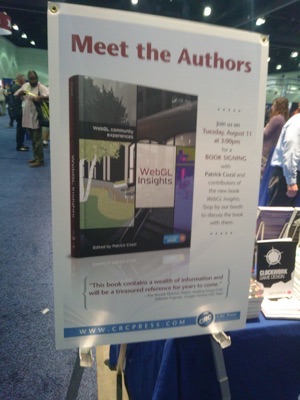 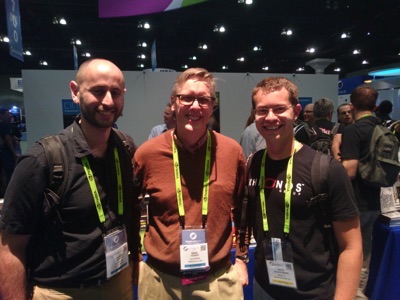 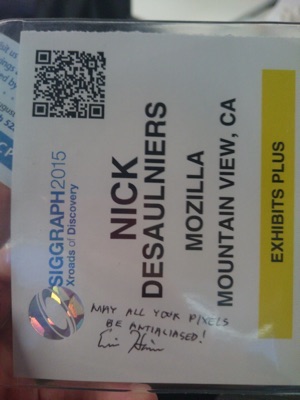